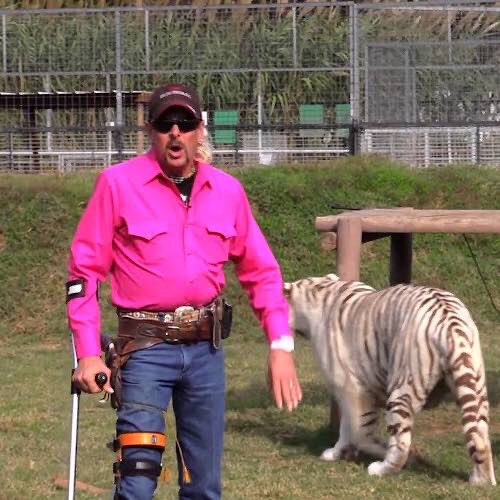 Joe Exotic’s Legal Team Are Set To Ask Donald Trump To Pardon Him.

The ‘Tiger King’ star is currently serving a 22-year prison sentence after being convicted of animal abuse and murder for hire, but his lawyers believe he was wrongly convicted and are now preparing to approach President Trump.

The team are said to have a contact at the White House and they’re determined to present the idea to the US President.

However, they’ve already made unsuccessful attempts to have the conviction overturned, having previously driven a huge bus to Washington with the words ”Pardon Joe Exotic” written on the side.

A source told TMZ that Joe’s reps will fly into Washington to hand-deliver a copy of their official pardon request to government officials.

Owner Jeff Lowe recently revealed that the Greater Wynnewood Exotic Animal Park – which became famous thanks to the Netflix series – has shut its doors for good and will become a ”private film set for ‘Tiger King’-related television content for cable and streaming services”.

In a post on Facebook, Jeff hit out at People for the Ethical Treatment of Animals (PETA) and the United States Department of Agriculture (USDA).

He wrote: ”Do the the permanent closure of the Wynnewood Zoo, I’m forfeiting my USDA exhibitors license.

”The very agency that has given my facility five consecutive perfect inspections, has now folded to the pressures of PETA and continue to make false accusations against me.

”Suspiciously, less than 24 hours after I contacted the USDA to voluntarily forfeit my license, they notify me that they are suspending my license for 21 days for a litany of falsehoods. In the State of Oklahoma, exotic animal ownership is perfectly legal (sic).”