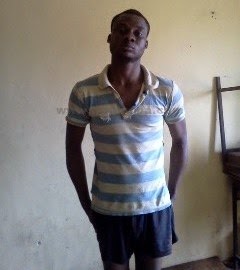 According to PM News, the shattered body of Barrister Charles Ajayi, 60, a  Senior Advocate of Nigeria, was recovered in a box at a nearby bush at Canaanland Street at the Redeemed Christian Church of God Camp, Km 46 Lagos-Ibadan Expressway.

The suspect who is a biological son of the slain lawyer was arrested same day in his fathers residence, at the scene of the incident, aroun 5:30 p.m. after the discovery of the corpse and Police preliminary findings. Continue…

Redemption Camp DPO, Olaiya Martins who led a team of detectives and some members of the community traced ground marks of the box from where it was dumped to the house of the suspect. The corpse was traced to the house of late Barr. Ajayi,where they met the suspect in a relaxed mood in the house.

Upon interrogation, the suspect who had earlier lied that his dad had gone on evangelism, however, confessed to the crime when he was taken to the Redemption Camp Divisional Headquarters.

He stated problem arose when his father confronted him for not responding to all the prayer points he raised, forcing his father to slap him. He said he went mad and went straight to the kitchen to pick up a knife to stab him and later a cutlass to cut his throat.

The exhibits including the knife and cutlass he used in killing his father had been recovered by the Police and the corpse of the SAN had been deposited at a morgue in Sagamu.

Ikemefuna Okoye, Commissioner of Police Ogun state has since sent a team of detectives led by the officer in charge of Homicide section of the Department of Criminal Investigation, Eleweran, Abeokuta to further investigate the murder.

Okoye sympathised with the family of the deceased, particularly his wife, who is also a legal practitioner and other children to take solace in the Lord. He admonished other members of the community in RCCG to be watchful, adding that, such incident will not occur again as the Command will improve on the synergy between the police and the Internal Security Operatives of the RCCG.

This website or its third-party tools use cookies. By closing this banner, scrolling this page, clicking a link or continuing to browse otherwise, you agree to the use of cookies.OkNoRead more