News collects all the stories you want to read 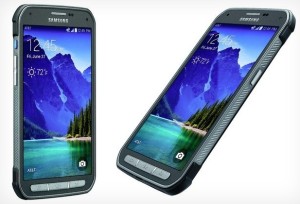 Water-resistance was a welcomed addition on Samsung’s new Galaxy S5 smartphone but for the most active among us, they could have taken it a step further. Fortunately, AT&T is now offering a more rugged version of the flagship for that demographic aptly named the Galaxy S5 Active.

Internally, the phone is virtually identical to the original with a 5.1-inch Super AMOLED display, quad-core Qualcomm Snapdragon 801 SoC operating at 2.5GHz, 2GB of RAM, a 16-megapixel camera and so on.

In addition to the IP67 water- and dustproof rating, the Active meets US Mil-STD 810G for shock, temperature, humidity, rain and altitude.

As you’d expect with the addition of shock protection, the chassis is a bit beefier. There’s also a new button on the side of the phone, something Samsung calls the convenience key. This button is used to give you quick access to the handset’s apps relating to outdoor activity.

There are some sacrifices that had to be made, however. Most notably, the built-in fingerprint sensor has been eliminated. That may not be too big of a hit considering how stubborn it is to operate. In our recent review, we found the feature to be both frustrating and cumbersome.

The Galaxy S5 Active is available in camo green, titanium gray and ruby red as of writing through AT&T. Pricing is set at $199 with a standard two-year service agreement or $714.99 sans contract. The phone is also eligible for AT&T’s Next installment plan over the course of 12 or 18 months. If you go that route, expect to pay an additional $35.75 each month with the 12-month plan or $27.50 every billing cycle if stretched over 18 months.

The Last of Us Part II: 23+ minutes of Gameplay

Last Of Us II release date, Plot & Gameplay video The Last Of Us Part II is the highly-anticipated sequel to …