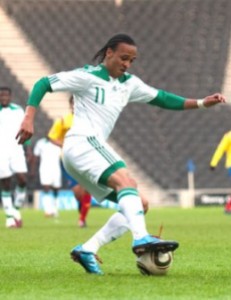 Returnee Super Eagles striker, Osaze Odemwingie has expressed excitement over his return to the team after being overlooked many times by the technical crew of the team.

The former Insurance of Benin player was involved in a dispute with Coach Keshi after being omitted from the squad for the South Africa 2013 Africa Cup of Nations that the Eagles eventually won after a 19-year wait.

Shortly after learning of his recall, Odemwingie took to social network and twitted @OdemwingieP thus: ‘‘Thanks for the congratulations. The return of the prodigal son Channels tv said? Anyhow una call am I am pleased to be back??.’’

On why the former West Bromwich Albion forward was recalled into the Eagles, Coach Stephen said that the forward apologised to the Nigeria Football Federation, NFF and the technical crew.