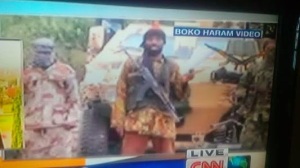 “I abducted your girls. I will sell them in the market, by Allah. There is a market for selling humans. Allah says I should sell. He commands me to sell. I will sell women. I sell women.” alleged Boko Haram leader Abubakar Shekau said in a video (he spoke in Hausa) that was released today.

There were reports about a week ago that some of the girls have been sold or married off for N2,000 each. With this new declaration from Boko Haram, it means the report is close to the truth. If they haven’t been sold already, then they will soon…unless the Commander-In-Chief of the Armes Forces does something and does it fast. If you want to watch the Boko Haram video, go here